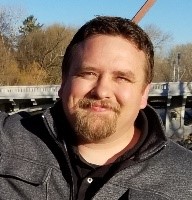 When asked what made him pursue a degree. Joshua’s response was similar to a lot of adult learners. “Things didn’t go as planned,” he said. After working as a clerk in a veterinary treatment facility at Nellis Air Force base where he helped veterans and active military personnel transport their dogs overseas, he was hired as an Office Support Technician at Hoover Dam.

Joshua Chavez’s education journey began with a recommendation to explore EPCE’s online courses from his apprenticeship director. He was already enrolled at Bismarck State College (BSC) in Power Plant Technology, when a friend told him about BSC’s Water and Wastewater Technology Certificate. He signed up and completed the course. “It is difficult to get into the water treatment field because you either have to have a certificate or experience.”

Ultimately, Josh used the knowledge he gained at BSC to advance into the position of Waste Water Operator I. “I felt my education at Bismarck State College really helped me get into my position at Hoover Dam and started me off on the right footing.”

Joshua’s advice to anyone on the fence about pursing an online education to, “Just do it, don’t hesitate. I completed my four year degree in Public Administration at a brick and mortar campus, but preferred the online experience.” Josh plans to continue his education by pursing a Graduate certificate in Natural Resources and ultimately a Master’s in Water Conflict Management and Conservation.