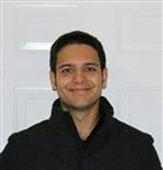 Marcos Cruz is the epitome of ambition, and how hard work and education pay off. After graduating with a Bachelor’s degree in Electrical Engineering from the University of Puerto Rico, he was hired as an Electrical Engineer at Surry Power Station owned by Dominion Energy. Within six months, he decided to take the plunge into an online graduate power systems engineering program through Worcester Polytechnic Institute (WPI).

“Dominion had sent an email that talked about their partnership with EPCE and WPI, and the fact that they provided a tuition discount,” Marcos said. He continued, “I researched and learned WPI had a good reputation for their power program – the people who taught it had industry experience, and that’s something I found very, very valuable.” He initially started in the online Protection and Control Graduate Certificate program. “I had just graduated, I had just started working. It was a lot to chew, but my counselor said the certificate could transfer over to the full master’s program, and that made a lot of sense, so I started pursuing the certificate,” he said.

His pursuit of the certificate helped him land his current position as an Engineer II in the System Protection Engineering department at Dominion’s Richmond, VA offices. “I was competing with many others, and the fact that I had the graduate certificate, the credentials, really helped set me apart,” he stated. Marcos has also seen how his education helps him daily in his responsibilities, noting, “There are still a lot of new things to learn, but I feel like I had a significant leg up coming from this particular program because I was already exposed to a lot of the terminology and symbols and so forth.”

Marcos decided to then pursue the full online Masters of Engineering in Power Systems Engineering program through WPI and is currently completing the last two courses. He will graduate in June of 2018. He won’t be resting on his laurels any time soon, though. He plans to take his Profession Engineering (PE exam) in the fall, noting, “It’s competitive out there, and you need to try to bring your ‘A game’ every day.”