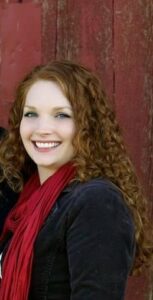 Having to juggle family, work, and school is no easy task, but Kelley Lembeck didn’t skip a beat. Kelley initially pursued culinary school but decided to make a change to the energy industry. She started her career at National Grid as a contractor, with the goal of becoming a full-time employee. “In order to do that, I knew I needed to get an electrical degree,” she noted. A co-worker of her husband, who also worked for National Grid, recommended the online Electric Power Technology program at Bismarck State he was in.

Kelley began the program, and shortly after was hired full-time as an Analyst: “They knew I would be earning my degree soon, which is why they hired me.”  That in itself was quite a feat, but so was balancing school and an expanding family. Kelley said, “I had a baby while I was earning my two-year degree. I was able to just take one class the fall I had my son, because I knew I wanted to keep going. If I’d had to be at certain places at certain times for classes, I wouldn’t have been able to do it.”

Not only did the degree help Kelley advance her career, she has been able to apply the knowledge she’s gained to her job. “National Grid is really big on safety. We have ‘hub’ meetings, and I’ve taken some of the things I’ve learned in class and used them as discussions in these meetings.”

With no intentions of slowing down, Kelley dove straight into the Bachelor of Applied Science in Energy Management at Bismarck State, with the goal to become a Senior Analyst upon completion of the program. She will also be expanding her family again in the near future and sees her pursuit of education as something that will benefit her family, noting, “It has helped me progress my career and it’s only going to keep going from here. I’ve been able to make more money, which means I can provide a more comfortable life for my family.”